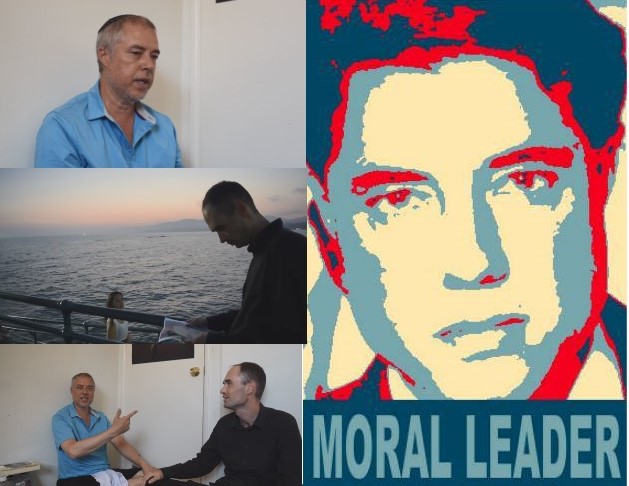 Perhaps the most catch-all way to describe Luke, though–other than as a man at life-long war with his own narcissism– is as an investigator: a seeker of truth, who tends to position himself as close to the source as possible. While some of us are interested in Jewish spirituality from afar Luke put on the Kippah and Tzittzit himself, and moved to the Pico-Robertson neighborhood of Los Angelas: one of the city’s two hearts of Orthodox Judaism. While we’ve all found ourselves enticed by pornography, Luke has the distinction of actually having immersed himself in the industry for a decade, interviewing hundreds of performers and producers, and even directing a porno himself. And of course, while if you’re reading this blog you likely have interest in the alt-right, chances are you have not explored it as up-close-and-personal as Luke, whose daily livestream has featured virtually every major figure in the movement.

What motivates this kind of rigor? I submit that it is because Luke’s interests are not merely intellectual, but existential: not passive curiosities, but to him, matters of urgency, even life or death. Symptomatic of the narcissistic personality disorder with which Luke was once diagnosed– and of which he admits to exhibiting at least some elements– is the need, in lieu of any internal sense of self-worth, to be constantly validated and stimulated by the external world: and one can sense this in Luke’s work, this desperate search for an ever-elusive wholeness. Whether he’s looking into the healing promised by the Alexander technique or the recovery promised by 12-step programs, the eros promised by the adult industry or the social-cohesion yearned for by the alt-right, it always seems like Luke might be trying find that one thing that could save him. “The people who come into my chat room [are] like me,” Luke explains in one of his ruminative car-livestreams, “absolutely broken: something broken in the way they connect to other people, it’s just not happening in a normal, easy fashion…  so we found some process such as extreme politics, some sort of excitement such as sports addiction, we’ve thrown ourselves into religion or to some esoteric philosophy…. and yet at core, when we’re alone and silent, and we have nothing to distract us no one, no substance, no process we’re fundamentally uncomfortable with ourselves.”

What may start out as a loss for Luke’s mental well-being, however, is transformed into quality work through his journalistic craft. The questions Luke asks are clearly animated by a deep existential drive to approach the truth of his subject as closely as possible. What is dug up,  whether it is what Luke hoped to find or not, is invariably, arrestingly, truthful and honest. Similarly, Luke seems pathologically unable to make complete covenant with any one world-view or perspective, considering the most compelling negations of a concept at the very moment of his highest enthusiasm for it, and in so doing reaching always toward an ever-broader understanding.  In these atomized times, in which our sense of shared reality diminishes with every news cycle, and it seems to be our lot to live perpetually on the precipice between meaning and chaos–I would argue  that this bold, searching, and existentially-motivated journalism is the kind that matters the most.

The spirit I have described as underlying Luke’s work– this existential drive to uncover the real truth on a given subject– is also the spirit with which Robert Stark and I approached our exploration of him in our pilot documentary as Stark Truth TV, “Supply”. Both of us went to Luke with our own deep, abiding uncertainties and concerns–our own black-pills– related to our involvement in dissident, online politics. Luke’s livestream was a central fixture of both of our alt-media intake, and with his practice of accompanying every step of his exploration of the alt-right with a scouring assessment of its psychology, he seemed a fitting choice to approach with our misgivings.

I also had questions about Luke himself. What made Luke’s stream great was its nuance–the unique perspectives he offered on the alt-right through his Orthodox-Jewish and psychological slants– but I occasionally grew suspicious when this nuance gave way to what seemed like mixed signals. Some days, such as when Luke covered the Senatorial run of ultra-anti-Semite Patrick Little, I wondered if his commitment to Judaism was some sort of hoax or troll, while other days, most memorably when he posted his brilliant “Tenderness” live-stream–quoted from and linked to above– I wondered if he actually thought the dissident right had anything worthwhile to offer, or if he believed his investment in it merely to be a symptom of mental illness. Was Luke just messing with us all? Was he crazy? Where we all duped, weaker personalities sucked into observing his exercises in narcissism? Or did he believe in a higher value to it all? These questions about Luke meshed with my personal uncertainties, and felt to be of great existential importance indeed. Meeting with Luke in person to make “Supply” was, at least I hoped, a chance for me to finally get the answers.

And I am pleased to report that, in as far as there were truly answers to get, I got them The three months since Robert and I met Luke have genuinely been ones of considerably more peace-of-mind for me. There is a theme in the documentary of Luke being a “Great Moral Leader” who has “all the answers”, and of course this kind of bombast is tongue-in-cheek, yet at the same time, it rests upon a significant grain of truth: that Luke indeed has acquired some real wisdom in his several, tumultuous, decades of adulthood, not by overcoming all of his problems, but by learning to live alongside them in serenity.

“God, grant us the serenity to accept the things we cannot change, the courage to change the things we can, and the wisdom to know the difference,” Luke intones at the beginning of classic livestream “The 12-Steps of Alt-Right Anonymous”.

Where genuineness can be hard to gauge over the internet, it was quickly obvious, upon meeting Luke, that all of his interests no matter how ostensibly contradictory were entirely genuine. Where Luke sometimes seemed online to be a person of contradictions, it was much more obvious in person that he was simply a master of certain kind of compartmentalization, and intellectual audacity. He was a man committed to exploring forbidden areas of knowledge, yes, but he also had his priorities straight: he had a clear, well-developed sense of where and when it was appropriate to explore such questions, and where a fixation on them could lead one’s life into chaos.

When we all sat down on Luke’s Pico-Robertson apartment floor, the satirical element of the Luke-as-spiritual-guru theme seemed to drift away, and instead what followed felt much as I imagined a meeting of Luke’s speculative Alt-Right anonymous would feel like– three men, sympathetic to deeply unpopular political views, sorting out, among other things, the appropriate role of such views in one’s life, and the damage wrought by the anti-social tendencies which so often accompany them. A clarity emerged and I only hope that some of that clarity made it onto my camera and into the final cut.

The most inspiring moment of the afternoon emerged when Luke gave insight into his craft as a journalist. This came after I asked Luke to compare and contrast his coverage of the alt-right to his coverage of the adult industry, somewhat ungracefully prodding him toward holding the alt-right as morally superior. Rather than taking the bait, Luke took the harder, more principled road citing a fundamental similarity in his journalistic approach to each. “I was exploring whether there was a genuine social good that can come out of free sexual expression,” he explained of his work on the adult industry, “It’s a legitimate question and I explored it… If there isn’t a good then how much damage is there?” I am sure Luke would say the same of white identity politics. The questions are legitimate, even inevitable in the current cultural climate: but to what extent is the collective that has formed around them a cesspool of searing damage? As I’ve written in a previous post, I believe the ultimate nature of the alt-right is as of yet indeterminate. In the meantime, Luke is content to keep exploring, and let his discoveries speak for themselves.

This, also, is the kind of journalistic integrity we strive for at Stark Truth TV. We have a number of interesting guests queued up, all of whom we’re hopeful or naive enough, to fancy might have some worthwhile prescriptions for our damaged souls. We hope you’ll keep watching.